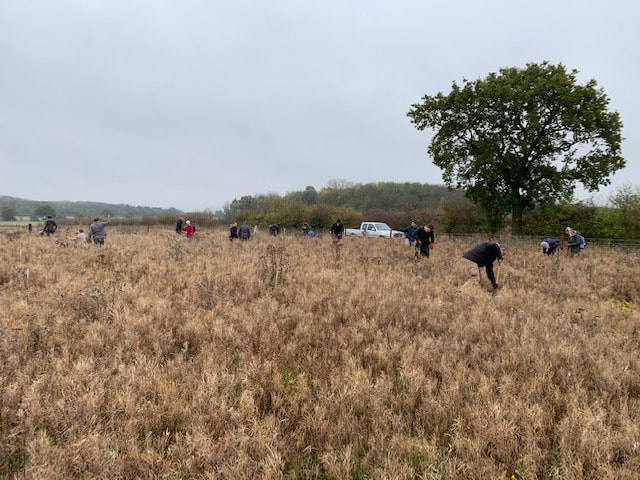 Well, we had an amazing 20 volunteers turn up on this first visit to the Wilder Doddington - Doddington Hall. The owners are embarking on an ambitious 100-year project to bring more nature back to the estate, ‘rewilding’ as it’s commonly known. We started the day with a short talk by ranger Heather about the project, accompanied by tea and biscuits.
Our task for the morning was tree planting in three fenced in areas that were planted this spring. Some of the trees didn’t make it through the summer drought so needed replacing. No gates had been installed to allow access to the tree planting areas so we had use step ladders to get over the wire fences. We removed all the tree guards then set about checking the saplings: if good, the guards went back on, if not, we replaced them. We were pleased to find that some that looked dead at first actually had green shoots at the base.
We soon got the three areas sorted. There was a walk between each one; Heather's truck struggled in some areas so we had to lug the kit but it was nothing we couldn’t manage.  We had lunch in a lovely wooded area, not far from the Hall.
​In the afternoon we walked back to near where we started, where Heather took us through how to perform a soil and earthworm survey. Near the end of the intro the first raindrops were felt but we set to work in small groups of two or three. By the time we had dug our first hole to survey the soil, it started to rain properly - then eased. Then the heavens opened. I think we all managed at least two surveys of the soil quality, depth of the topsoil, numbers and type of worms, finally recording the What3Word location. All the data will be logged and used to monitor the progress of the land.
By the time we got back to the cars we were all pretty much wet but everyone agreed we'd had a great day at Doddington.  I’m sure we will be back in the future as there are big plans for the place and I’m sure they will find some worthwhile tasks for us.
Jeff